Between the 9th and the 14th of August Oxford Brookes Racing competed at Formula Student Germany. The competition, now in it’s 10th year, is widley reknown as the most prestigious formula student competition in the world.Teams travel from all around the globe to compete against other universitise and technical colleges at the Hockenheim circuit. After an early set off on the Tuesday morning the Brookes team arrived at Hockenheim ready to set up for competition.

Scrutineering is the first event in the competition, and we secured the 49th position which for us meant that the process would begin during the afternoon of the 10th. OBR16, who came to be known as Betty by the team, passed mechanical scrutineering with only a couple of minor changes needed on the morning of the 11th. The Tilt test was next and Betty breezed through without an issue however the Noise test that followed tilt gave Betty and the team a lot of difficulties.

At idle the car was well below the limit, however with the engine at 6500 rpm the noise was too loud. This set back cost the team two days with everyone working on the problem and trying to find a way through the noise requirements. After a relentless effort the team finally passed noise on the morning of autocross. However because of the time it had taken to sort the issues this meant that unfortunately Betty and the team had missed our chance to compete in the skidpad event.

Aside from the on track “dynamic” events, the team also compete in static events. This year these took place on the Thursday. The cost and design events were held in the morning and the business presentation was set to take place in the afternoon. The team placed 42nd overall for the Cost event, and 33rd overall in Business. The team learned later that evening that they had made design finals and the following (Friday) evening they would compete against 6 other teams for the top positions in design. This is the first time in OBR’s history that the team has made it into FSG design finals.

After a tough two days, the team passed scrutineering with time to preform just a single run in the acceleration event. OBR was able to secure a solid time of 5.06 seconds placing them 48th overall in the combustion competition. This left the team hungry for more and wanting to prove how well our car could perform, especially with the setbacks the team had experienced. The autocross event occurring later in the day offered the perfect oppurtunity to do this. However with all the excitement Autocross was not without it’s challenges. During OBR’s first run the silencer failed, causing a DNF. After a quick fix we were able to get onto our second run, unfortunatley during this second run the car broke causing a loss of drive. The damage was too extensive to fix in the final hour of Autocross forcing the team to accept two DNF’s. Because of the scheduling of the competition this placed the team to start early in the morning for Endurance. However even with such a short time before the final endurance event the team couldn’t focus on fixing the car as following on from the autocross session the team had to compete in the difficult design finals. These finals were judged by a panel of industry professionals and they pushed the team to their knowledge limits for 2 hours. All went well and after a tough day the team finished 5th out of 73 cars in the design competition.

The team answer tough questions from the judges during the Design event.

The car rebuild had gone well and on Sunday the 14th of August the team set out to compete in the endurance event and Betty was the 3rd car on track setting an impressive lap of 77.86. A time which remained the fastest until 2pm in the afternoon. Similar to the rest of the week the Endurance event was not without it’s problems and on the 3rd lap the car encountered an issue which caused a loss of shifting, along with another issue which caused the car to stop on track multiple times during the final laps of endurance. However the team managed to overcome these problems and in the end the car finished endurance, a feat which has not be accomplished since FSG 2012.

Formula Student Germany pushed the team to their limits, the team finished with the high of finishing endurance, and OBR placed 33rd overall a spectacular achievment for the team considering the DNF’s in 2 of the dynamic events. With a difficult weekend the team put the problems behind them and embarked on the road trip directly to Hungary, ready to compete in the Formula Student event in Gyor. 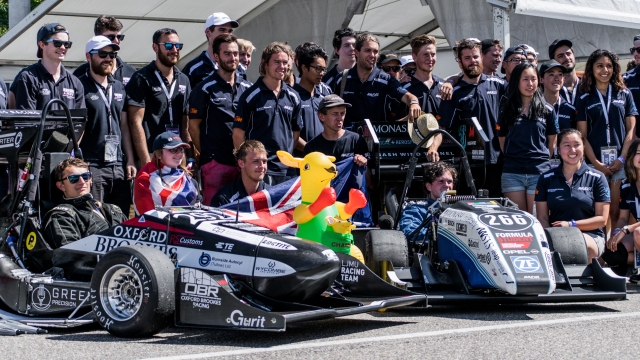 Oxford Brookes Racing alongside our friends from Monash University

We would like to thank all of our sponsors for their continued support, without them we would not have been able to race such a competitive car. Although the event didn’t quite go our way we managed to show that OBR16 had good pace compared to the competition and the focus now will be on improving reliability and coming back stronger.